I love visiting museums on holiday, so couldn’t miss the opportunity to see the Legion of Honor Museum in San Francisco this summer. The Museum has an excellent collection of ancient art, particularly from the Mediterranean area, including some fascinating objects from ancient Cyprus. Louise Chu, the Associate Curator of Ancient Art and Interpretation, very kindly showed me round the collection, including a visit to the Museum’s storeroom – it’s always a treat to see behind the scenes!

The California Palace of the Legion of Honor – to give its full title – opened in 1924, and was founded by the philanthropists Adolph and Alma Spreckels as a museum of fine arts and a memorial to the Californian soldiers fallen in the First World War. The building is modelled on the Palais de la Légion d’Honneur in Paris, and is beautifully situated overlooking the Pacific Ocean, though rather foggy on the day of my visit. 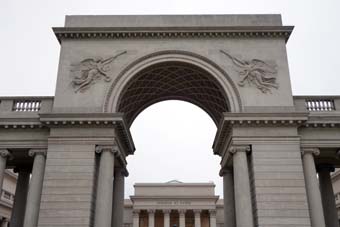 The Legion of Honor, San Francisco

The ancient Cypriot objects on display are in the Ancient Art gallery, and include several pieces that were given to Alma Spreckels by the Queen of Greece in the 1920s, including this Late Cypriot bull askos.

Also on display is a Cypro-Archaic Bichrome amphora with lotus-flower decoration, the gift of Dr Morris Herzstein. This bears a close resemblance to the amphora from Thomas Hollings’ collection on display in the Leeds City Museum, said to be from Amathus. The two are not identical – the shapes are different, especially the foot, and the decorative schemes vary – but it’s tempting to trace some family resemblance. 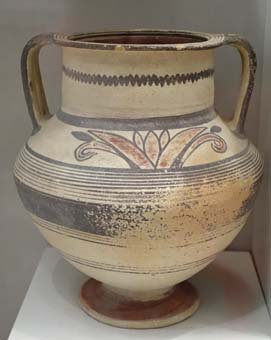 Down in the store, I very much enjoyed seeing more of the collection, including a delicate Black on Red juglet with an almost lustrous burnished surface – a technique which reduces the porosity of the clay, and therefore slows down evaporation of the juglet’s contents, possibly expensive perfumed oil. 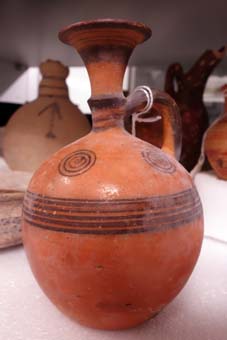 The highlight was this Red Polished zoomorphic jug, with incised decoration picked out in white, with a long spout, raised loop handle and a perky little tail. It seems to me somewhere between a duck and a pig, with its short legs and full-bellied shape. Unlike some fantastical ancient Cypriot vessels, this would have been quite sturdy and practical for holding and pouring liquids, as it stands firmly on its four splayed legs.

I had a wonderful time at the Legion of Honor, and am very grateful to Louise for arranging my visit. I hope to return some day!

A couple of weeks ago I was lucky enough to have the opportunity to visit the ancient Cyprus gallery at the Neues Museum in Berlin. It’s a varied and interesting collection, with some truly outstanding individual pieces. It was largely brought together by Max Ohnefalsch-Richter, a near-contemporary of T.B. Sandwith in the early stages of archaeological exploration on Cyprus.

The building itself is architecturally interesting; built in the mid 19th century, it was badly damaged in the Second World War and has only recently been reopened, in 2009, after extensive reconstruction. Parts of the interior, including the Cyprus gallery, still have a semi-dilapidated feel to the decor; there’s an arresting juxtaposition between the antique feel of the modern building, and the vividness and freshness of the ancient Cypriot art.

The display itself is rather minimal in terms of exposition, with only the briefest information given on object labels, but fortunately the wonderful MAM Bookshop had been able to provide me with an English copy of the very full and well-illustrated catalogue of the Berlin collection.

Among my favourite objects was this Bichrome jug, where the exuberant design is carefully fitted to the curve of the pot. There’s nothing of this style in the Leeds collection, unfortunately; to me, they are among the most appealing and intriguing pieces of ancient Cypriot art. 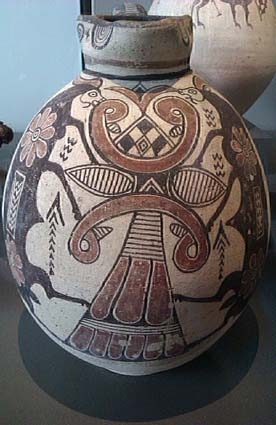 I was also pleased to see some Base Ring juglets, always a favourite of mine, with snaky elements in the design.

Possibly the most charming piece is this wonderful Red Polished jug/animal hybrid, originating from L.P. di Cesnola’s collection, with its four short legs, looping handle and spout ending in a flared rim; reminiscent of something from Oliver Postgate‘s imagination.

One object which intrigued me was this Base Ring single-handled lentoid flask, with a pinched seam  and decoration of multiple crossed lines of white paint. There’s a very similar flask in the Leeds City Museum collection, with an unusually good provenance; it comes from Klavdia, part of a 1902 donation from the British Museum from its 1899 excavations.  It would be interesting to know more about this flask, especially its provenance, but it doesn’t appear in the catalogue, and the label was not informative; I’m currently trying to track down a bit more information. [Update: the very helpful team at the Neues Museum inform me that the flask was part of Ohnefalsch-Richter’s collection, and the exact findspot is unknown. Ohnefalsch-Richter excavated widely in Cyprus and also bought extensively from dealers on the island, making it difficult to draw any conclusions about where this flask might be from.] 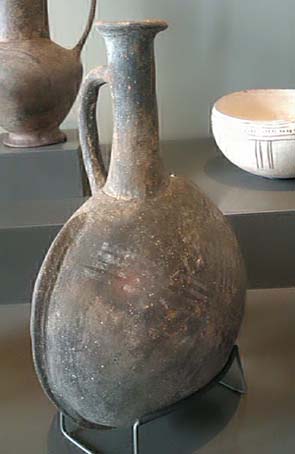 It was great to see such a well-preserved and varied collection, and so much better than just reading the catalogue; there’s nothing like the experience of seeing the objects in real life. And of course the Neues Museum has the advantage of being situated on the city’s Museum Island, within easy walking distance of the Altes Museum and Pergamon Museum – what better way to spend a day’s holiday?