Last week I took a break from drafting my thesis chapter on the 19th century roots of the Leeds City Museum’s ancient Cypriot collection, in order to visit the new exhibition at Weston Park Museum, ‘Cyprus: Island of Copper’. 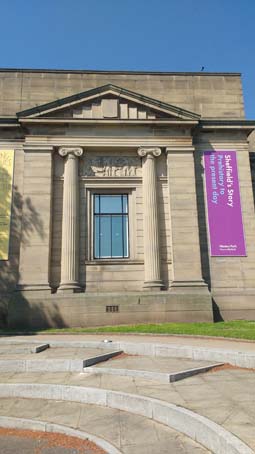 In fact, the Leeds and Sheffield collections have a lot of shared history; many of Sheffield’s objects came from the collection of T.B. Sandwith, of which a large part was placed on loan at Weston Park after 1875, then sold by the Sheffield auctioneers Nicholson, Greaves, Barber, and Hastings in 1897, in aid of Armenian and Cretan refugees. I would love to see the catalogue of this auction, as it would reveal so much about the spread of ancient Cypriot objects in the region, but so far my researches have drawn a blank – any suggestions would be very welcome! At any rate, it seems that the curators of Weston Park promptly bought back part of the collection for the Museum, where it has remained ever since. The other part of the collection came from the Reverend Julius de Baere, based for a while in Limassol; it would be fascinating to find out more about his collecting activities and networks.

I’ve seen some of the Sheffield collection in store before, and it includes some wonderful objects. It was great to see them in this thoughtful and interesting display, which conveys a lot of information in a relatively small space. I particularly liked the double-sided glass display cases which allowed an excellent view of both sides of the objects, and also let the sunshine illuminate the ancient glass. 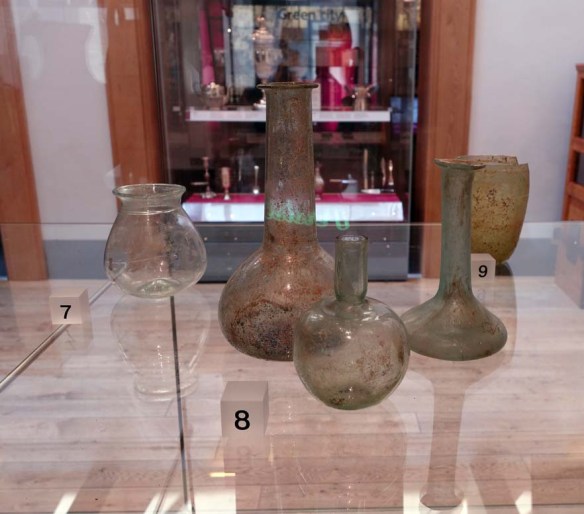 There’s a stunning example of Black Polished incised ware, made around 4,000 years ago – it looks so fresh and vibrant, having sat out most of the intervening years in a tomb. It’s very similar in style to the one illustrated in Sandwith’s Archaeologia paper. 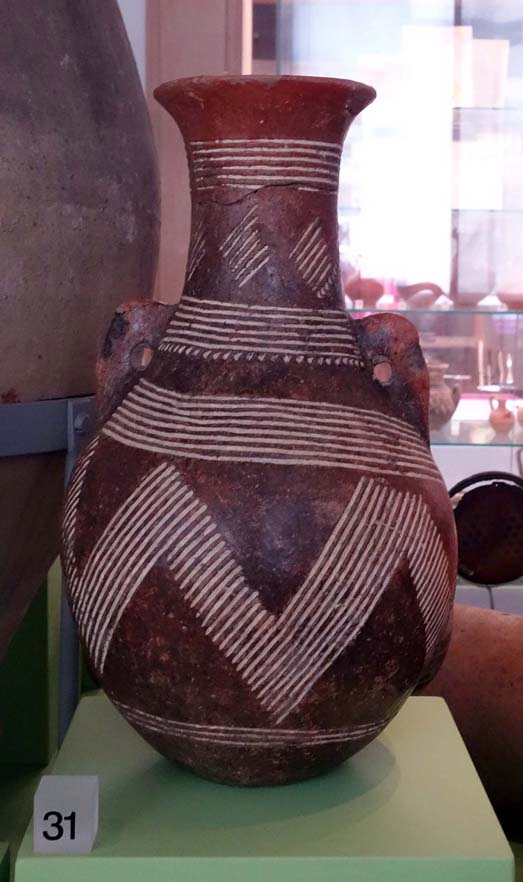 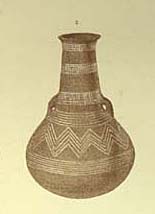 I was very struck by this jug with a figurine holding an oenochoe – the same type as the jug from the Kent Collection which I discussed at the ‘Classical Cyprus’ conference last year, but a very different example. The figurine is large, clearly moulded separately and mounted on the jug with the aid of a step for her feet to rest on, and she’s holding the oenochoe almost at arm’s length. I don’t know how large the opening from the base of the oenochoe into the main jug is, but from the size of the oenochoe, it looks like you could pour at a reasonable rate; presumably for some kind of special occasion rather than everyday use. 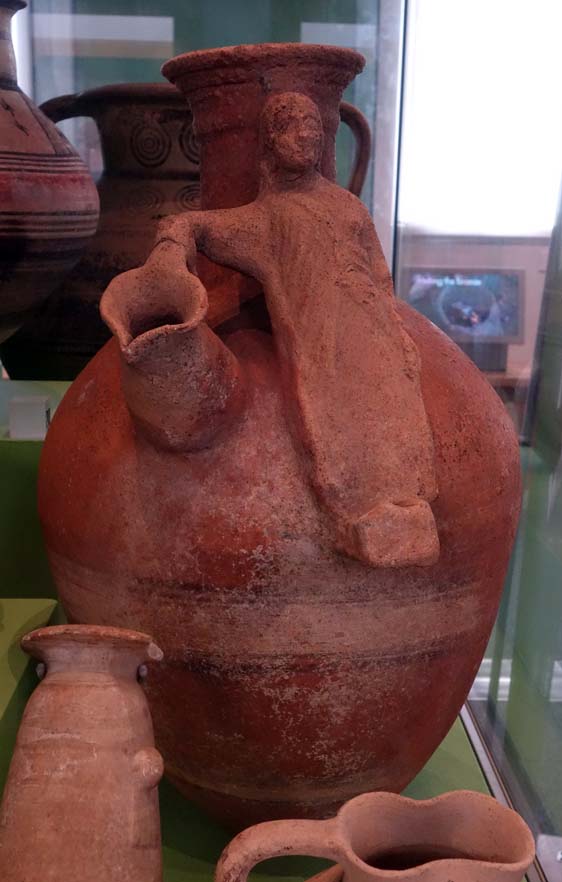 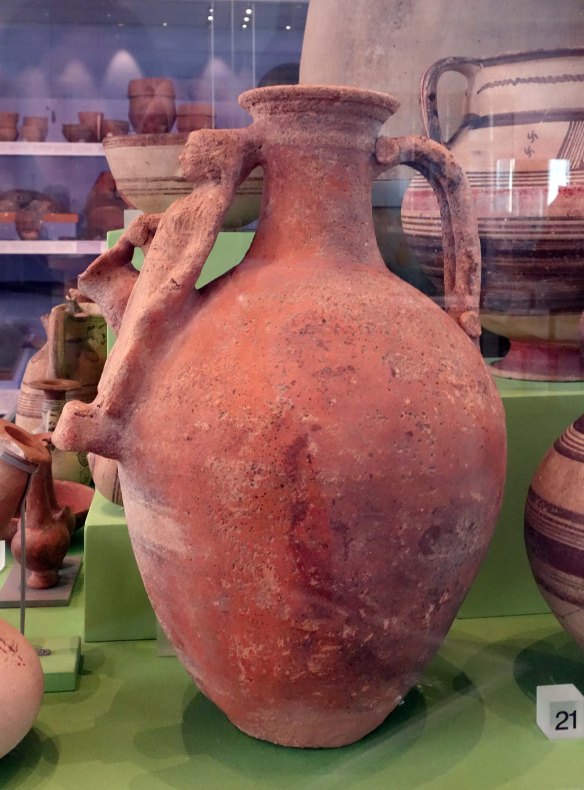 Jug with figurine holding an oenochoe – side view © Museums Sheffield 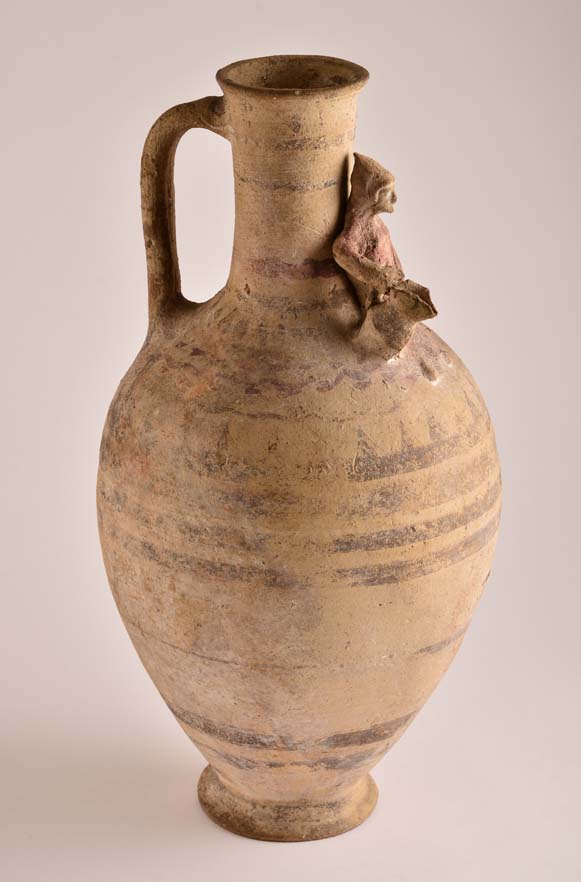 Jug with figurine holding an oenochoe, from the Kent Collection, Harrogate           © Harrogate Museums and Arts

However, the use in ritual of this bull askos really stretches the imagination. It doesn’t look like it’s got an opening at the mouth, just at… the other end. At any rate, it looks like a sturdy beast, with a considerable capacity. 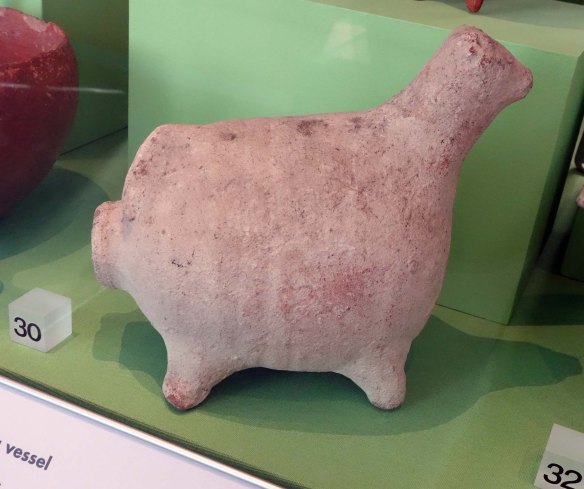 The most surprising things for me were the jugs with faked inscriptions – I’ve never seen anything quite like this before! They’re really interesting in indicating the drivers of commercial value in the 19th century. As a rule, Cypriot ceramics were too easily accessible to make it worthwhile to fake them, but ceramics with inscriptions are a different story. Evidently there was a market of buyers who knew that inscriptions were important, but weren’t sufficiently clued up to recognise problems with the technique (the characters were incised after firing) and the loose approximations of ancient scripts.

The exhibition was produced with the Sheffield and Peak District Young Archaeologists’ Clubs, and their responses to the objects were included in the display; a chance to see them from a fresh perspective, and a helpful reminder of how speculative and subjective much of our interpretation of ancient art has to be. Their artistic responses also demonstrated that time had been spent looking closely at the objects and experiencing them at first hand, encouraging the visitor to do the same. 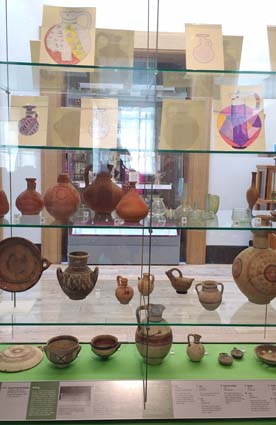 I timed my visit to coincide with a lunchtime talk by Sheffield Museums’ Curator of Archaeology, Martha Lawrence, who gave lots of insights into the collection’s histories and the themes of the exhibition, including trade, metalworking, religion and burial, and writing. The objects have all been professionally photographed as part of the Cyprus Institute’s project on Cypriot Antiquities in Foreign Museums, which is providing a real impetus to make records of smaller collections available online.

The exhibition is on until April 2019, and I thoroughly recommend a visit – I’m hoping to go back myself for a second look!

Last month I attended the annual Postgraduate Open Day at the Society of Antiquaries of London – a great opportunity to admire the stunning architecture of Burlington House on Piccadilly, and to hear all about the Society’s history, collections and archives. 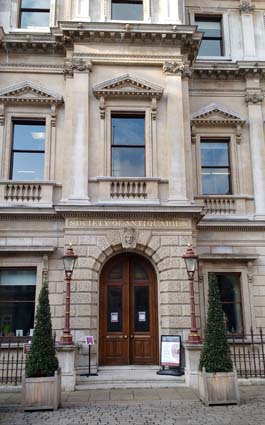 The Society of Antiquaries of London

The Society played a brief but significant role in the history of Cypriot archaeology. As I’ve mentioned before, in 1871 Thomas Backhouse Sandwith, British Vice-Consul on Cyprus from 1865-1870, presented a paper on his research to the Society, titled ‘On the different styles of Pottery found in Ancient Tombs in the Island of Cyprus’. This was eventually published in the Society’s journal Archaeologia, along with lithographic plates illustrating the objects under discussion. Some of Sandwith’s collection came to Yorkshire, and was exhibited and sold, creating interest in ancient Cyprus which spread through the region. (In fact, I’ve just had a paper published on this!).

I was delighted to have the opportunity to do a quick bit of research in the Society’s library at lunchtime, with help from the expert librarians – quite apart from the research opportunities, it’s an amazing place to work! 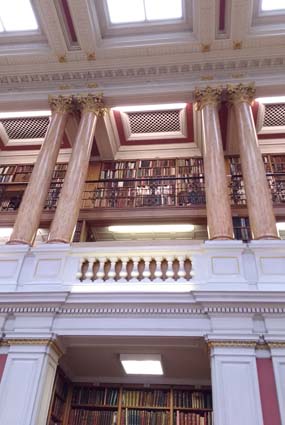 View of the library, Society of Antiquaries

I drew a blank in finding out any more about the lithographs that accompanied Thomas Sandwith’s Archaeologia paper – I think it’s destined to be one of those minor but niggling research questions that don’t find an answer. However, it was thrilling to see the record of the meeting at which he presented his paper. 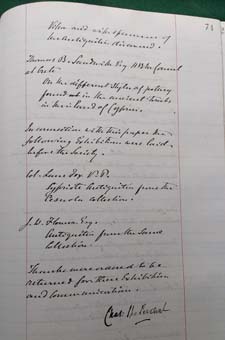 I was able to find out a bit more about another collector of ancient Cypriot objects, Mr Benjamin Kent, whose collection is now in the Mercer Art Gallery, Harrogate. I knew that Benjamin Kent had been a Fellow of the Society of Antiquaries, and thanks to the Society’s admirable record-keeping, I was able to locate his nomination for Fellowship in 1939. This helpfully includes a list of those who nominated him, which is really interesting in helping to analyse the circles he moved in and the contacts he made. 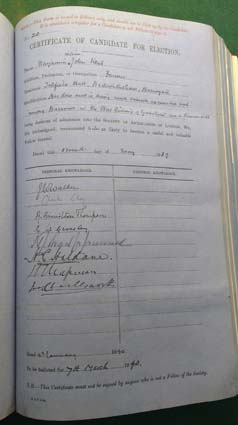 Certificate of Candidate for Election, Benjamin Kent © Society of Antiquaries

None of the names are immediately familiar to me, so there’s more work to be done in tracing them. Under ‘Qualification’, the form cites his ‘valuable excavation work among Barrows in the West Riding of Yorkshire and on Roman sites’. This very much fits with my perception of Benjamin Kent; he was more of a hands-on explorer than an armchair antiquarian and collector, and interested in ancient objects mainly for what they could tell him of the past.

Both Benjamin Kent and his father were also Fellows of the Society of Antiquaries of Scotland, so I’m hoping there may be similar records available there. In addition, some of Kent’s papers have recently been accessioned into Special Collections at the University of Leeds library, as part of the Yorkshire Archaeology Society collection. I’m really looking forward to finding out more about the background to his ancient Cypriot collection, other research projects permitting!