What better solution to the post-Christmas blues than a visit to Cyprus? I’ve been lucky enough to have a few days at the Lemba Archaeological Research Centre near Paphos, being trained in identifying and recording ancient Cypriot pottery by Dr Lisa Graham. I can thoroughly recommend sorting sherds in the January sunshine; it was so enjoyable to spend some time looking closely at pottery, as a change from thinking about theory. It’s really helped me to develop my approach to the cataloguing part of my PhD project, and ways to streamline the recording work. 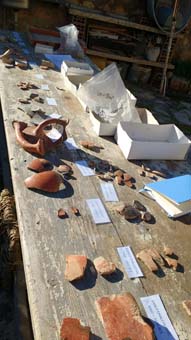 I also enjoyed visiting the recreated roundhouses at the Lemba Experimental Village, a project run by Edinburgh University to understand more about prehistoric Chalcolithic buildings. These have been left to collapse under the pressure of environmental forces, to shed light on the formation of the neighbouring archaeological site. It was really interesting to see excavation sites in Kissonerga, currently covered over for the winter, and the pace of residential development in the area, often in close proximity to archaeological remains.

The experimental roundhouses at Lemba

We visited the Museum of the Mycenaean Colonisation of Cyprus at Maa, at the end of the peninsula near Coral Bay, one of the westernmost points of Cyprus. Designed by the architect Andrea Bruno, it’s a unique building, largely underground, with a copper roof and huge pivoted copper door. Its low, rounded profile is designed to reflect and blend in with the coastal landscape. Some information is presented inside about the Mycenaean impact on ancient Cypriot culture, but it’s mainly a space for reflection, pointing like an arrow towards the Aegean where Mycenaean settlers came from.

The Museum of the Mycenaean Colonisation of Cyprus

The museum at Kouklia was more conventional, although still very special, being housed in a 13th century Lusignan manor house. This included some wonderful artefacts from the surrounding area, including these fantastic zoomorphic rhyta, and a juglet which looked intriguingly similar to one from the Leeds collection. The site of Palaipaphos itself is also fascinating, with evidence of cult activity dating back to the Chalcolithic period.

Zoomorphic rhyta in the Kouklia museum 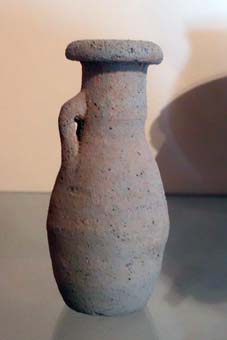 Juglet from the Kouklia museum… 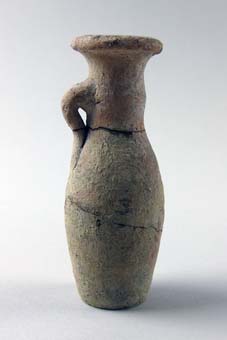 …and from the Leeds City Museum collection.

We also visited the Paphos Archaeological Park with its Hellenistic and Roman mosaics, famous from countless reproductions but even more impressive when seen in person. I particularly liked this pomegranate, reminding me of the bone pomegranate ornament which was once in the Leeds collection.

I loved my time on Cyprus, and would only have wanted it to be longer; thanks to Lisa, I learned a great deal and saw some amazing places. I’m already planning my next trip!